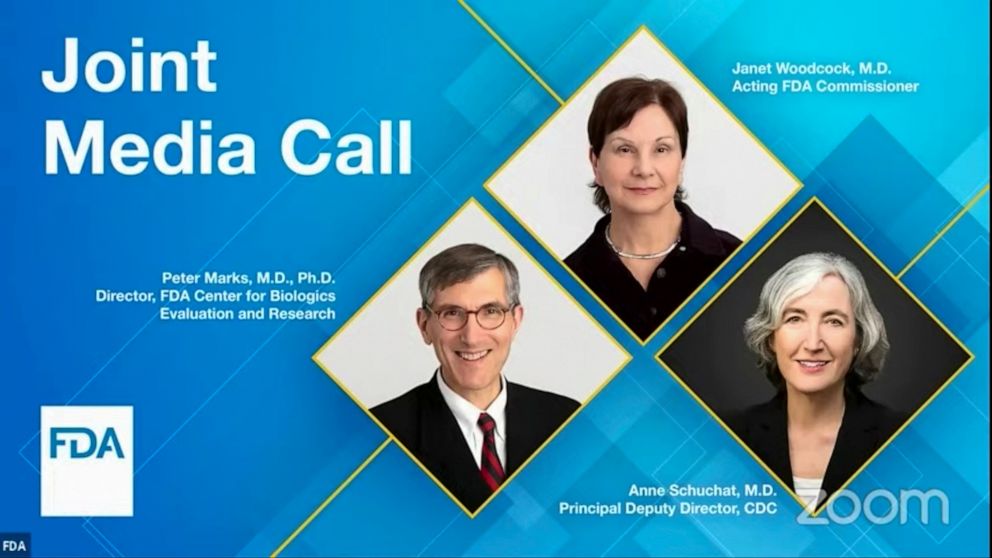 District of Columbia health director Dr. LaQuandra Nesbitt says she’s not aware of any cases of dangerous blood clots among the 16,000 Washingtonians who had received the J&J one-dose vaccine before the temporary halt recommended by federal health authorities.

“This pause means that the system is working properly,” Nesbitt says.

J&J said in a statement Tuesday it was aware of the reports of blood clots, but that no link to its vaccine had been established.

A CDC committee will meet Wednesday to discuss the cases. The FDA has launched an investigation into the cause of the clots and low platelet counts. There have been six reported clots among the 6.8 million shots administered.

U.S. health authorities cautioned doctors against using a typical clot treatment, the blood-thinner heparin. “In this setting, administration of heparin may be dangerous and alternative treatments need to be given,” the FDA and CDC say.

HERE’S WHAT ELSE IS HAPPENING:

BERLIN — South Africa has suspended giving the Johnson & Johnson vaccine as a “precautionary measure” following the FDA decision in the U.S. to pause the use of the vaccine while rare blood clots are examined.

All six cases were in women between ages 18 to 48, including one who died. The unusual clots occurred six to 13 days after vaccination.

South Africa has given more than 289,000 shots of the J&J vaccine to the country’s health workers without any reports of blood clots, Health Minister Dr. Zweli Mkhize says.

He says South Africa is halting the use of the J&J doses “out of an abundance of caution.” He expects the questions regarding the J&J vaccine should “be cleared within a matter of days.”

OTTAWA, Ontario — The Public Health Agency of Canada says it has received a report of an adverse event involving blood clots after someone in Canada received the AstraZeneca vaccine.

This is the first such reported case in Canada. The federal agency says the person is recovering at home. The vaccine was the one produced at the Serum Institute of India.

The U.S. Food and Drug Administration and the Centers for Disease Control and Prevention called for the pause Tuesday to investigate six reports of potentially dangerous blood clots, among more than 6.8 million doses administered.

The nation’s top infectious disease expert says, “It’s less than one in a million.” Fauci adds people should “pay attention” to symptoms associated with the blood clots, particularly between one and three weeks after the shot.

The White House was first informed of the announcement Monday night, coronavirus coordinator Jeff Zients says. He defended the administration’s notification to states, saying, “there was no heads up here.”

Fauci says the pause by regulators is a “testimony to how seriously we take safety.”

In a televised address following a Cabinet meeting, Erdogan says the government was re-imposing bans on intercity travel, barring people above age 65 and those below 18 from using public transport, re-adjusting public sector shifts and working hours, closing down sports and leisure centers and expanding nighttime curfew hours to combat the surge in infections.

Weddings, engagement parties and other crowded gatherings will be barred until after a holiday that follows the month of Ramadan. He warned of stricter measures should the new restrictions fail to bring the infections down.

Turkey’s single-day infections increased five-fold since March to reach above 50,000. Last week, the country hit a record 55,941 confirmed cases. On Tuesday, the health ministry reported 59,187 new infections, the highest daily number since the start of the pandemic. It also reported 273 confirmed deaths.

Overall, Turkey has 3.9 million cases, seventh highest in the world, and more than 34,000 reported deaths.

BERLIN — Johnson & Johnson says it is delaying the rollout of its coronavirus vaccine in Europe amid a U.S. probe into rare blood clots.

The announcement came after regulators in the U.S. say they were recommending a “pause” in administration of the single-dose shot to investigate reports of potentially dangerous blood clots.

“We have been reviewing these cases with European health authorities,” the company said. “We have made the decision to proactively delay the rollout of our vaccine in Europe.”

The delay is another blow to vaccination drives in European Union member nations, which have been plagued by supply shortages, logistical problems and concerns over unusual blood clots in a small number of people who received the AstraZeneca vaccine.

The blood clot reports prompted several countries in the 27-nation bloc to limit the AstraZeneca vaccine to older age groups, who are more at risk from serious illness when infected with the coronavirus.

The European Medicines Agency, the EU’s equivalent to the FDA, says it is having its safety committee investigate these J&J blood clot cases “and will decide whether regulatory action may be necessary.”

WASHINGTON — The Pentagon says it is immediately pausing the use of the single-dose Johnson & Johnson COVID-19 vaccine, amid reports of potentially dangerous blood clots.

The announcement came as Johnson & Johnson says it was delaying the rollout of its vaccine in Europe, and U.S. regulators recommended a “pause” in the administration of the shot.

“The safety of our force and their families is a top priority for the Department,” says Pentagon spokesman John Kirby, adding the department is reviewing it distribution of vaccines to address the issue and continue to provide shots to defense personnel.

In a joint statement, the Centers for Disease Control and Prevention and the Food and Drug Administration announced it was investigating clots in six women in the days after vaccination, in combination with reduced platelet counts. More than 6.8 million doses of the J&J vaccine have been administered in the U.S.

PARIS — France suspended all flights from Brazil on Tuesday amid mounting fears over the particularly contagious coronavirus variant that has been sweeping the South American country.

Although France has seen comparatively few known cases of the P.1 variant striking Brazil, the ravages it is causing in Latin America’s largest nation are increasingly raising alarm bells in France.

Castex noted travelers from Brazil already needed to test negative for the coronavirus before their departure and upon arrival in France and quarantine for 10 days. But the government has been facing mounting calls from health experts for a flight suspension to further limit potential spread.

The country is struggling with another wave of coronavirus infections and hospitalizations that is straining hospitals in Paris and elsewhere.

France has reported 5.1 million coronavirus cases since the pandemic began, the highest number in Europe, and 99,000 confirmed deaths.

NEW DELHI — India is experiencing its worst pandemic surge, with average daily infections exceeding 143,000 in the past week.

The spike is particularly alarming because India is a major vaccine producer and a critical supplier to the U.N.-backed initiative that aims to help distribute shots fairly. Already the rise in cases has forced India to focus on satisfying its domestic demand and delay deliveries elsewhere.

When infections began plummeting in India in September, many concluded the worst had passed. Masks and social distancing were abandoned, while the government gave mixed signals about the level of risk. Then cases began rising again in February.

WASHINGTON — The Food and Drug Administration says it expects a short pause of Johnson & Johnson vaccines while regulators investigate reports of potentially dangerous clots in a small number of patients.

Dr. Janet Woodcock, the agency’s acting commissioner, says, “We expect it to be a matter of days for this pause.”

The U.S. FDA and the Center for Disease Control and Prevention recommended the pause Tuesday to investigate unusual clots in six women that occurred 6 to 13 days after vaccination with the J&J vaccine. The clots occurred in veins that drain blood from the brain and occurred together with low platelets. All cases were in women between the ages of 18 to 48.

Nearly 7 million J&J doses have been administered in the U.S., almost all without serious side effects.

Regulators say they want to educate patients and medical professionals about spotting and treating the clots. The clots were observed along with reduced platelet counts, making the usual treatment for blood clots, the blood thinner heparin, potentially “dangerous.”

NBC’s announcement that it will air “Roll Up Your Sleeves” came hours after the U.S. on Tuesday recommended pausing the use of Johnson & Johnson’s single-dose COVID-19 vaccine to investigate reports of potentially dangerous blood clots.

During the hourlong program, Biden will stress the importance of getting vaccinated and feature Dr. Anthony Fauci, the U.S. top expert on infectious disease.

“Roll Up Your Sleeves” is presented by Walgreens and created by the media company ATTN in partnership with Civic Nation’s Made to Save initiative.

WASHINGTON — A White House coronavirus adviser says the pause on the Johnson & Johnson vaccine by the FDA and CDC “will not have a significant impact” on the overall vaccination plan in the U.S.

Jeff Zients, the White House COVID-19 Response Coordinator, says “We are working now with our state and federal partners to get anyone scheduled for a J&J vaccine quickly rescheduled for a Pfizer or Moderna vaccine.”

The CDC and FDA announced Tuesday they recommended a pause in the use of the Johnson & Johnson vaccine as they review data involving six reported U.S. cases of a rare and severe type of blood clot in individuals after receiving the J%J vaccine.

Zients says in a statement the Johnson & Johnson vaccine makes up less than 5% of the recorded shots in arms in the United States so far.

He adds that’s more than enough supply to continue the current pace of vaccinations of 3 million shots per day and meet the President’s goal of 200 million shots by his 100th day in office.

LONDON -- Britain has begun offering coronavirus vaccinations to anyone over 45 after hitting its target of giving at least one dose to everyone over 50 by the middle of April.

The government says all residents over 50, health care workers and people with serious medical conditions had been offered a shot, and about 95% have received one.

As a result, the government launched the second phase of its inoculation campaign on Tuesday by expanding eligibility to people 45 to 49.

Despite the good news, British Prime Minister Boris Johnson warned the U.K. would inevitably see “more hospitalization and deaths” as it emerges from lockdown.

MADRID — Spanish Prime Minister Pedro Sánchez says the benefits of taking the Johnson & Johnson vaccine are greater than the risks.

Sánchez was asked about U.S. move to pause the J&J vaccine during his presentation of Spain’s plans for the EU recovery funds.

The prime minister says he would have to inform himself of the situation, but “we have to all be aware that all the vaccines being administered to the Spanish population, and the European, as well as American populations, are safe.”

“They all count on all the guarantees they need, and the balance between benefit and risk is clearly on the side of taking the vaccine,” Sánchez says.

Spain is expecting to receive 300,000 doses of the J&J vaccine on Wednesday, the first delivery of the shots made by the Janssen subsidiary. The country had planned to prioritize people ages 70 and 79 to receive the single-dose vaccine.

WASHINGTON — The U.S. is recommending a “pause” in administration of the single-dose Johnson & Johnson COVID-19 vaccine to investigate reports of potentially dangerous blood clots.

In a joint statement Tuesday, the Centers for Disease Control and Prevention and the Food and Drug Administration said they were investigating clots in six women that occurred in the days after vaccination. The clots were observed along with reduced platelet counts — making the usual treatment for blood clots, the blood thinner heparin, potentially “dangerous.”

More than 6.8 million doses of the J&J vaccine have been administered in the U.S., the vast majority with no or mild side effects.

CDC’s Advisory Committee on Immunization Practices will meet Wednesday to discuss the cases. The FDA has launched an investigation into the cause of the clots and low platelet counts.

Previously, concern about the unusual blood clots centered on the AstraZeneca vaccine, which has not yet received authorization in the U.S.