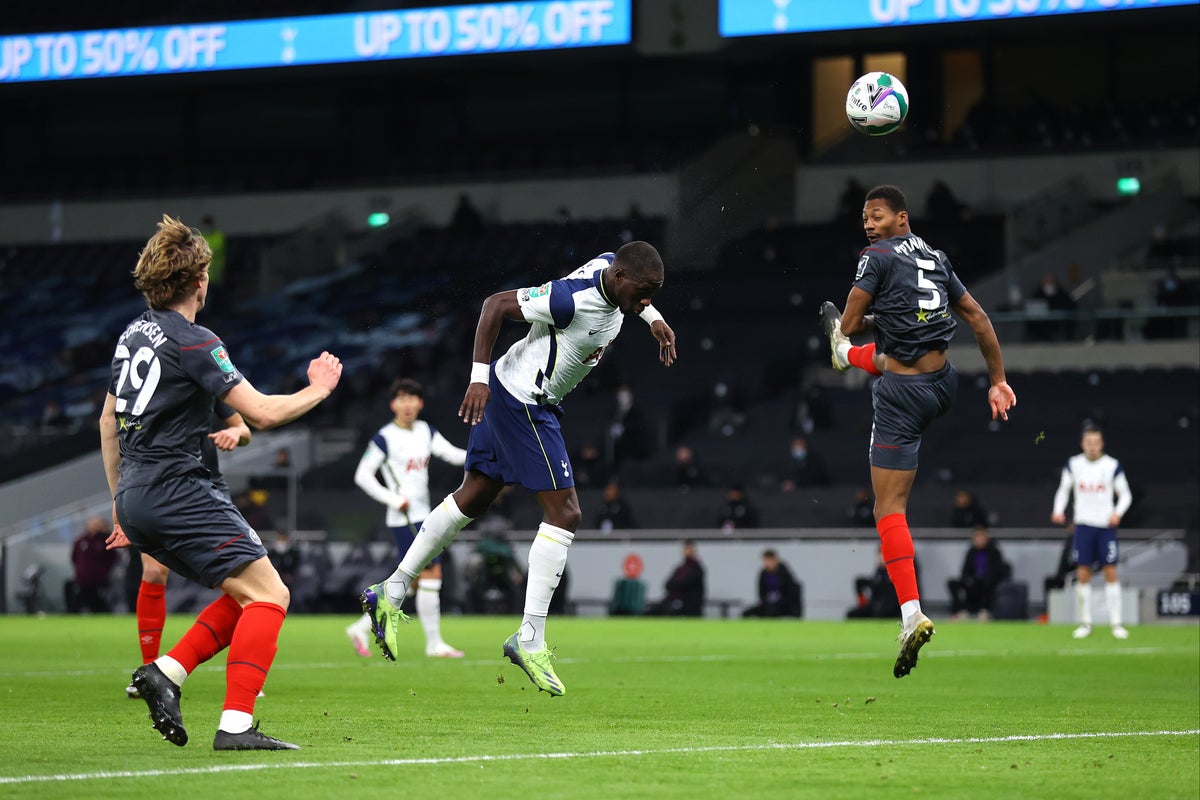 Jose Mourinho is looking to take his Tottenham side one step closer to ending their 13-year trophy drought as they host Championship side Brentford in this evening’s Carabao Cup semi-final.

Spurs’ triumph over Chelsea in this competition back in 2008 was the last time they lifted silverware, but victory tonight would set up a final meeting with either Manchester United or Man City at Wembley in April.

Standing in their way are a Brentford side who have already knocked four Premier League teams out of this season’s competition en route to the club’s first ever major cup semi-final.

Spurs held the advantage at half-time as Moussa Sissoko’s fine header from a Sergio Reguilon cross left the hosts 1-0 up. Ivan Toney had an equaliser ruled out for offside by VAR before Heung-min Son added a second for Spurs.

Thomas Frank also goes and has a long exchange with Hojbjerg, who he coached in the youth teams of the Danish national side. The pair are all smiles.

A few serious, but seemingly agreeable words exchanged between Thomas Frank and Jose Mourinho at full-time.

The Portuguese was absolutely furious with that Dasilva tackle on Hojbjerg.

Spurs are on their way to Wembley!

85 mins: It gets worse each time you see it. Hojbjerg has got stud marks and blood streaking down his leg and when he eventually gets up he’s absolutely furious, though Dasilva has already departed.

It takes his Danish international teammate Henrik Dalsgaard to calm him down, and he is eventually substituted anyway, with Tanganga sent on.

83 mins: Now then, are Brentford about to go down to ten men? He goes in on Hojbjerg and in real time seems to win the ball but after play goes on for a good minute Mike Dean is summoned to have a look at the touchline monitor.

It looks like the midfielder tries to chop inside but catches Hojbjerg high on the shin with his other foot.

81 mins: Marcus Forss is also into the action in place of Bryan Mbuemo, but thus far its looked like the home side who are more likely to add to the score.

Spurs are pushing for the killer third and this time it’s Ndombele bursting forward on the overlap and rattling the outside of the woodwork.

Harry Kane latches onto a ball over the top but is denied from close range by a superb block from Raya.