BBC News
Share on FacebookShare Share on TwitterTweet
Sunderland will face Lincoln in the League One play-offs after finishing the regular season with a 1-1 draw against relegated Northampton. 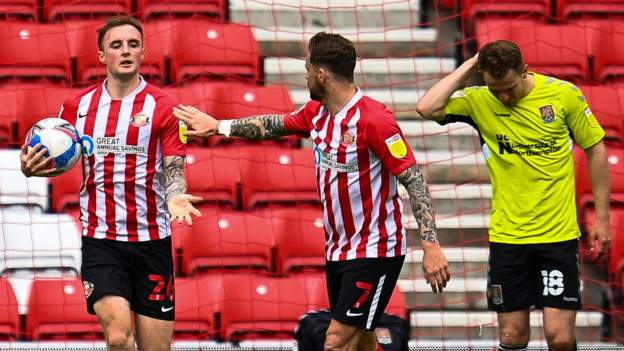 Sunderland will face Lincoln in the League One play-offs after finishing the regular season with a 1-1 draw against relegated Northampton.

The Black Cats, who finished fourth, came from behind to cancel out Sam Hoskins' 84th minute free-kick for the Cobblers by levelling three minutes later through midfielder Carl Winchester.

Now Sunderland know the Imps will travel to the Stadium of Light for the second leg of the semi-final on Saturday, May 22, for the right to head to Wembley after first meeting at Sincil Bank on Wednesday, May 19.

Sunderland struggled to find an extra gear against Northampton and chances were few and far between before half-time.

The nearest Sunderland came was when Cobblers goalkeeper Jon Mitchell tipped over Lynden Gooch's deep cross that threatened to drop under the bar.

Gooch went close again after the restart when Mitchell denied him from close range.

The best chance fell to Jordan Jones when he missed the target after lovely link-up play with substitute Aiden O'Brien.

But with six minutes remaining Northampton edged ahead when Hoskins' free-kick from 22 yards deflected off the wall and beyond Lee Burge.

The lead did not last long because Winchester was on hand from close range to level things up with his first for the club after Jones' curling effort hit both posts.