The Guardian
Share on FacebookShare Share on TwitterTweet
Glenn Middleton and Chris Kane scored to give St Johnstone, who were without four players due to Covid and self-isolation rules, a 2-1 win over St Mirren at Hampden Park 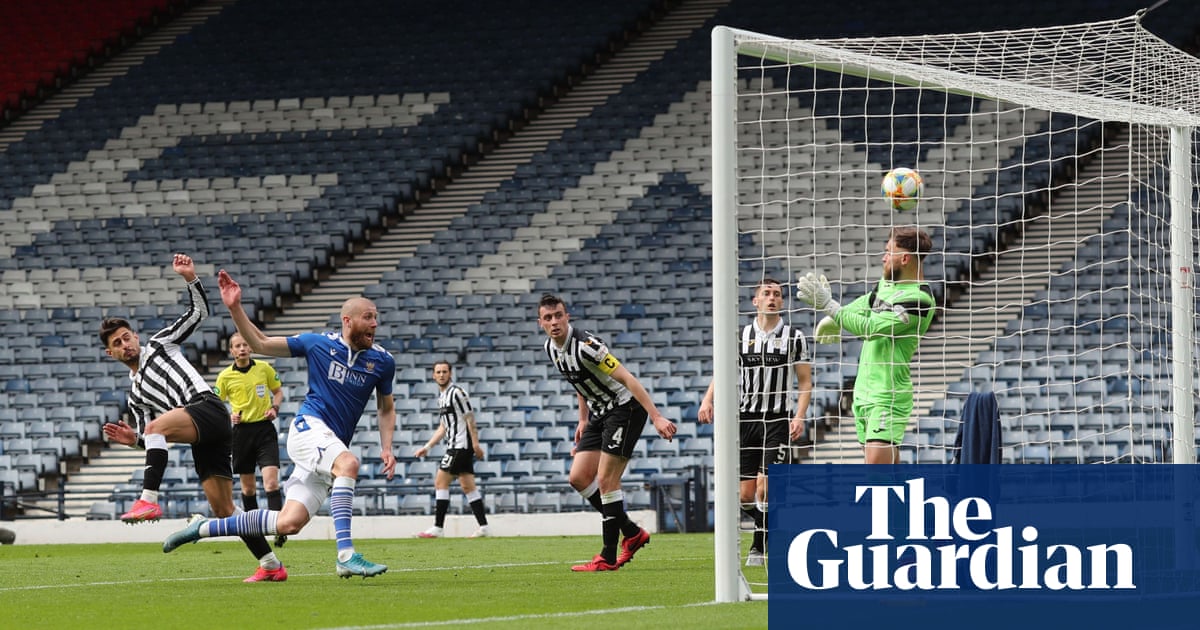 Callum Davidson has said he will increase St Johnstone’s coronavirus safeguards to ensure their Scottish Cup final hopes are not threatened by another quarantine.

The Perth club are on course for a cup double after the substitute Glenn Middleton helped to steer the League Cup winners past St Mirren at Hampden. But they had to do without four players as they booked a 22 May date with Hibernian.

Davidson saw his plans disrupted on Thursday when the club announced two players had tested positive for Covid-19 – with another couple ruled out through track-and-trace measures.

Even without Stevie May, Liam Craig, Murray Davidson and the second-choice goalkeeper, Elliott Parish, St Johnstone had enough to win, with Middleton setting up Chris Kane’s opener before netting himself two minutes later with a free-kick.

“I’m delighted,” said Davidson. “It’s been a real tough week. It just shows you that Covid is still about. We’ve obviously been trying to stay to the very strict guidelines at the club – but this week shows how quickly it can spread.

“We haven’t really done anything different to what we’ve done all season. We had to shut the place down after the results came in and training was disrupted. We’ve hardly trained this week. But the players’ attitude was tremendous. I’m just delighted for them.

“I’m not angry about the situation, I just wanted to make sure the players were safe. We now need to find out how the virus came into the club and try to stop it at source because it’s the last thing you want.

“We will be extra careful. We might be even stricter and tell the lads to just turn up for training at the grass and go home again after. Bring your pack lunch with you!

“I’d hate for players to miss out on the final because of Covid so it’s my duty to make sure everyone is as safe as possible.”

Davidson is a contender for the manager of the year awards after leading St Johnstone into their second final of the season. The 44-year-old said: “It’s all credit to the players. For a club like St Johnstone to get to two finals in one season is an amazing achievement.

“Glenn came on and produced the magic which you sometimes need to get to a final. Kano was in the right place at the right time too. He’s scored in the quarter-final and now the semis. Let’s hope he can score again in the final.”

St Johnstone are celebrating but St Mirren are left with another dose of “what ifs”. Having come up short against Livingston in the last four of the League Cup as well as seeing St Johnstone snatch the last place in the top six, this was another day of regrets.

They should have had a penalty when Jamie McCart fouled Kristian Dennis in the area then handled his goal-bound shot all in the same movement, while Collin Quaner missed from close range.

“Sometimes it’s just not meant to be and for us this season, it’s not quite meant to be,” said Goodwin, whose side did pull a late goal back through Conor McCarthy.

“We had the best opportunities of the game when it was 0-0. For the first, I think Zander Clark makes a good save – I don’t think it’s a miss by Lee Erwin. For the second Quaner has got to do better – but we won’t blame anyone.

“I’m proud of the players’ efforts but I’m gutted for the supporters at home. Kristian Dennis is adamant that his shot has hit McCart’s hand. Those are the decisions you hope for but I don’t think over the course of this season we’ve carried enough luck.”