BBC Sport
Share on FacebookShare Share on TwitterTweet
Seven-time champion Ronnie O'Sullivan launches a stunning comeback from 5-3 down to beat Ding Junhui 6-5 in the first round at the Masters. 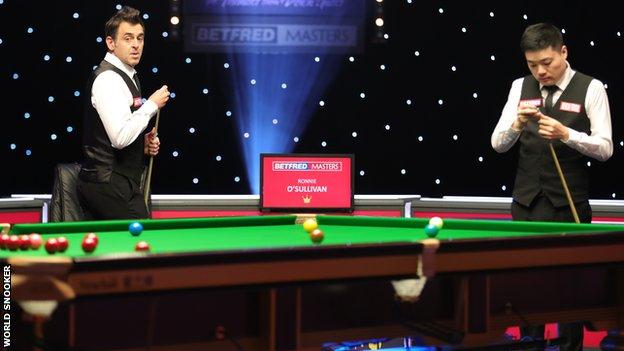 Seven-time champion Ronnie O'Sullivan launched a stunning comeback from 5-3 down to beat Ding Junhui 6-5 in the first round at the Masters.

The pair traded superb centuries in the next three frames as Ding went 5-3 up.

O'Sullivan hit back again by punishing Ding's missed chances, claiming victory with 73 in a final-frame decider.

John Higgins faces Mark Allen in the evening session (19:00 GMT), with the winner of that match to face O'Sullivan in the quarter-finals on Friday.

O'Sullivan came from behind time and time again to claim a sixth world title in August and showed his mettle under pressure once more to claim a fifth victory over Ding in as many meetings at the Masters.

With the event taking place behind closed doors at the Marshall Arena, spectators missed out on a stellar spectacle which featured four centuries and six further breaks of 70 or more.

O'Sullivan told BBC Two: "I just had to hang in there and you never know until it is over, I just tried to stay positive so I went back to my mindset of Sheffield and it got me in the zone. I still made mistakes but was able to respond quicker.

"If your mindset is right, you can play badly and still get chances. Today I dug in and my mental skills were good and it puts a bit of doubt into your opponent. Whether you play well or not, if you have that level of intensity the game can swing back in your favour."

World number nine Ding added: "I had good chances to win the match but did not make them. I sometimes made it complicated to win frames, I just needed to take simple shots and take the points. I sometimes confused myself.

"Ronnie played a bit better than the first half and I sometimes chose the wrong positional shots."

Seven-time world champion Stephen Hendry on BBC Two: "I am afraid the pressure got to Ding to get over the winning line with the chances he had and missed.

"It was a wonderful match, both players played fantastically well but unfortunately for him he weakened when he saw the winning line.

"At 3-0 down it did not look good for O'Sullivan at that stage but he has played some fantastic snooker to win this match."

Six-time world champion Steve Davis: "Ding's head went a bit. There is nothing worse for a snooker player to start the match well and end it badly, it is debilitating to your morale. He panicked and messed up shots.

"I don't think he will have lost to many players today but he has got a bit of mental block against O'Sullivan, he struggles to get over the line against him.

"Ding let him off the hook and that is the last person you want to do that against. He gets the freedom back in his game and to clear up at the end shows how dangerous he is."

1997 world champion Ken Doherty: "Ding missed a trick, he played superbly with two centuries and further high scoring breaks but we saw an array of misses from him late on.

"The pressure got to Ding and he will be very disappointed. On any other day, he would have beaten 99% of the tour but O'Sullivan came back very well. When he gets to the winning line he does not balk, he has tremendous bottle and certainly showed it today."