Keir Starmer has sacked his shadow chancellor in a rapid shake-up of Labour’s top team in a bid to inject renewed vigour into the party in the wake of disastrous election results.

Rachel Reeves was inserted in the top Treasury post shadowing Rishi Sunak, replacing Anneliese Dodds, who was given the job of chairing a review of policy as party chair.

After her shock removal as chair and campaign coordinator last night, deputy leader Angela Rayner was given the job of taking on Michael Gove as shadow chancellor of the Duchy of Lancaster, as well as a newly created role on the future of work, in a move which allies said left her “significantly more powerful both in terms of the party and policy”.

But former leader Jeremy Corbyn warned that a reshuffle will not be enough to restore the party’s hopes, urging Starmer in an article for The Independent to return to the left-wing “vision” of the 2017 and 2019 manifestos.

And there were mutinous noises from the left of the party, with close Corbyn ally Jon Trickett saying a challenge to Starmer’s leadership could not be ruled out. Starmer says he will ‘take responsibility’ for Labour election results 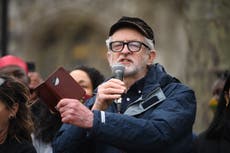 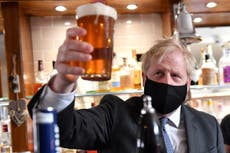 Boris Johnson to give go-ahead for hugging and indoor drinking

Sir Keir aimed to deliver decisively on his promise of change with a reshuffle just three days after the super Thursday elections which delivered humiliation for Labour in Hartlepool, Tees Valley and the West Midlands, but saw the party cement its power in Wales and claim a string of mayoral successes including London, Greater Manchester, Liverpool, Bristol, West Yorkshire and the West of England.

Starmer said that the “fantastic” metro mayor and Welsh results, coupled with signs that Anas Sarwar was beginning to turn round Labour fortunes in Scotland gave him “optimism and inspiration for the future”.

But it was clear that he had faced awkward negotiations with Ms Rayner over her new role, as a reshuffle announced to the press early on Sunday morning took until almost 10pm to complete.

And there were grumblings within the party, with one insider greeting the deputy leader’s move with the comment: “Who would want to be national campaign coordinator in name only with no power when you’re just made the scapegoat for the failures of Keir’s team?”

Ms Dodds had faced criticism for failing to establish a public profile in her year shadowing Rishi Sunak, though allies said she had led the fight on government waste and the Greensill affair, as well as closing the polling gap with Tories on management of the economy.

Former Bank of England economist Ms Reeves is regarded as a combative Commons performer who has kept sleaze allegations against Boris Johnson in the headlines in recent months.

Birmingham Ladywood MP Shabana Mahmood took the campaign coordinator job as one of a slew of lower-ranking changes, which also saw Wes Streeting join the shadow cabinet as shadow secretary for child poverty.

Lucy Powell entered the shadow cabinet with the housing brief, while Thangam Debbonaire replaced Valerie Vaz as shadow leader of the Commons.

But some senior figures tipped for redeployment hung onto their jobs in a shake-up which was less wide-ranging than some had expected, with Lisa Nandy keeping her foreign affairs post, Jonathan Ashworth remaining at health and Nick Thomas-Symonds staying at home affairs.

Veteran MP Nick Brown - who served in both the Blair and Brown governments - was replaced as chief whip by his former deputy Alan Campbell. Mr Brown said he thought it was a “reasonable” time to move on and parted from Keir’s team “on good terms”.

Announcing the line-up late on Sunday evening after a long day of behind-closed-doors discussions, Starmer said: “The Labour Party must be the party that embraces the demand for change across our country. That will require bold ideas and a relentless focus on the priorities of the British people. Just as the pandemic has changed what is possible and what is necessary, so Labour must change too.

“I look forward to working with our refreshed and renewed team to take on that challenge, deliver that change and build the ambitious programme that will deliver the next Labour government.”

Ms Rayner’s removal as party chair sent shockwaves through the party on Saturday, with Greater Manchester mayor Andy Burnham going public with his dismay, tweeting: “I can’t support this.”

But an ally of Rayner suggested she had gained from the move to a role where she will be “much more visible now she isn’t being held back”.

The ally said: “She will lead both party reform and the development of a policy agenda that is credible, radical and actually connects with the voters we need to win.

“She will set out our vision, develop policy across the board and lead the fight to win back voters across former Labour heartlands and take on the government’s sham ‘levelling up’ agenda.”

Sir Keir was faced with a potentially difficult by-election within weeks of the traumatic Hartlepool defeat, as Tracy Brabin confirmed she will step down as MP for Batley and Spen after her election as West Yorkshire metro mayor. Her 3,525 majority in the 2019 general election was smaller than the 3,595 margin comprehensively overturned by Tories in the north-east seaside town.