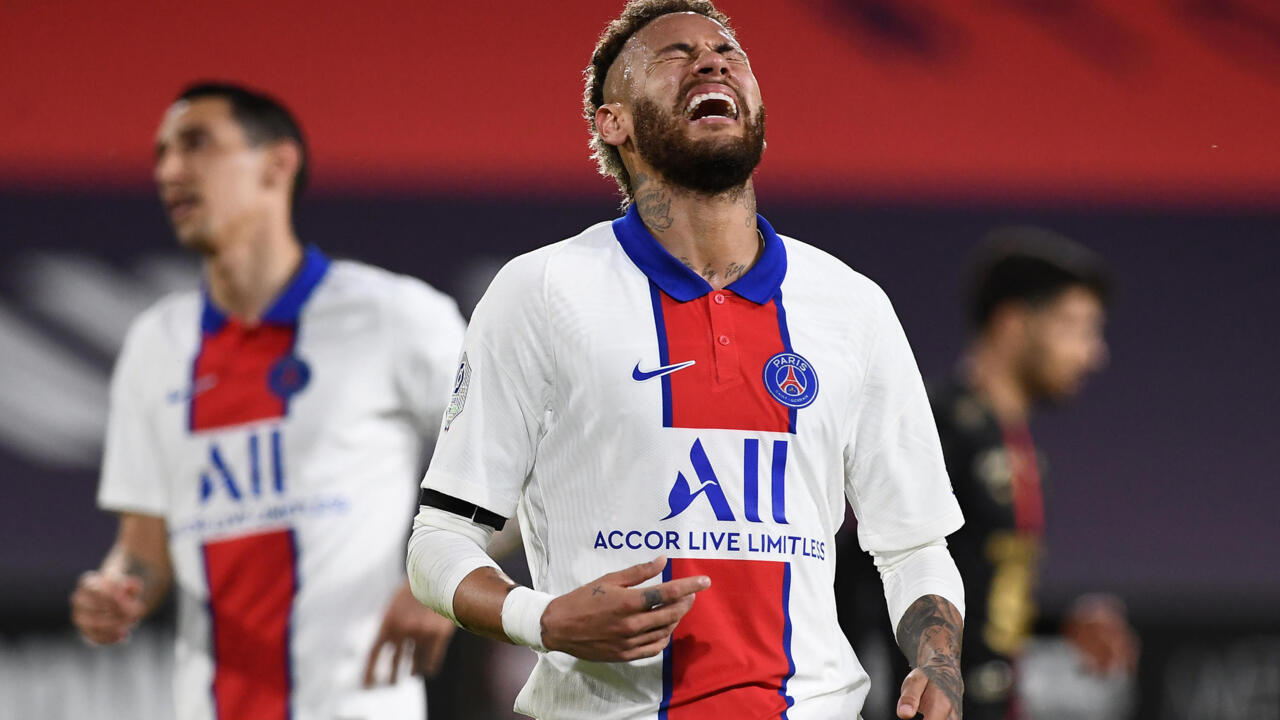 Neymar was on target the day after signing his contract extension but Paris Saint-Germain were held to a 1-1 draw at Rennes on Sunday that leaves Lille a step closer to a remarkable Ligue 1 title triumph.

PSG led at half-time after Neymar converted a controversial penalty award, but they were pegged back in the second half as Serhou Guirassy headed in the equaliser.

Presnel Kimpembe was later sent off for Mauricio Pochettino's side, who could not get back to winning ways on their return to domestic action following their Champions League semi-final exit against Manchester City.

PSG are now three points adrift of Ligue 1 leaders Lille, who know they will be champions for the first time since 2011 by taking four points from their remaining two matches of the season.

The Parisians have won the French title in seven of the last eight years but they have regularly wobbled this season and the decision to replace coach Thomas Tuchel with Pochettino during the winter break looks like it will not have the desired impact.

"We will keep believing until the end, we won't lose faith, but at Paris Saint-Germain we need to do much better," captain Marquinhos told broadcaster Canal Plus.

"Lille are a really good side and are winning every match. We have two games left and we need to believe, focus on ourselves and perform better."

Lille had opened up a provisional four-point lead by winning 3-0 at Lens on Friday, with Burak Yilmaz scoring twice.

It appeared PSG might respond in kind, despite being without the suspended Kylian Mbappe or the injured Marco Verratti in Brittany.

They were given the chance to take the lead in first-half stoppage time when referee Ruddy Buquet surprisingly awarded a penalty after reviewing footage of Rennes defender Nayef Aguerd attempting to block a Layvin Kurzawa shot.

Neymar marked Saturday's announcement that he had extended his contract until 2025 by stroking home from the spot.

However, Rennes are chasing European qualification and they went looking for the equaliser, getting their reward 20 minutes from time when Guirassy headed in Benjamin Bourigeaud's corner.

PSG were then reduced to 10 men three minutes from time when Kimpembe's lunge on Jeremy Doku earned the defender a straight red card.

Earlier, a first senior goal for Belgian youngster Eliot Matazo gave Monaco a 1-0 win at Reims that kept the principality club on course for a top-three finish and a return to the Champions League.

Teenager Matazo, signed from Anderlecht aged 16 in 2018, struck in the 20th minute and Monaco then saw out the victory to get back on track after losing at home to rivals Lyon last weekend.

The principality side were beaten 3-2 in that game and were then leapfrogged by Lyon after they defeated Lorient 4-1 on Saturday.

However, Sunday's victory took Niko Kovac's side back up to third on 74 points, one point better off than Lyon.

"The pressure is not on us but on Lyon because they were not in the Champions League this season and they need to be there," said Kovac.

"Before the match I told the players to enjoy themselves because they were fourth and they have had a great season."

Champions and Champions League semi-finalists in 2017, Monaco are also five points adrift of Lille and two points behind PSG.

Only the top three in France qualify for the Champions League, with the top two going straight into the group stage of Europe's elite club competition and third entering in the third qualifying round.

Fourth will have to settle for the Europa League with fifth set to go into the new Europa Conference League.

Marseille remain fifth, above Lens on goal difference, despite losing 1-0 at Saint-Etienne. Rennes are a point behind them in seventh.