Goals and highlights: Morocco 2-0 Comoros in Africa Cup of Nations

VAVEL.com
Share on FacebookShare Share on TwitterTweet
The Moroccan team, one of the favorites to win the title, scored their second victory of the phase and sealed their passage to the next round. 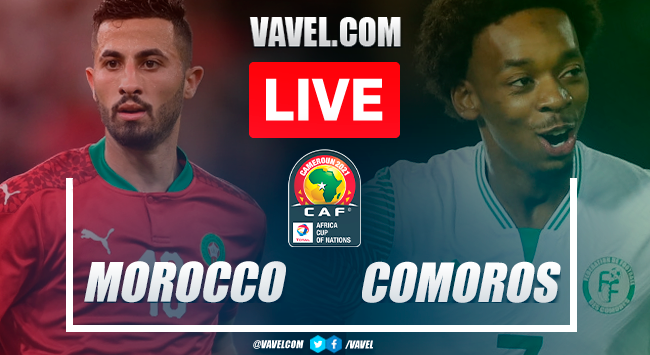 On a pass from Amallah, Zakaria Abukhial pops up inside the box to increase the lead.

Youssef En-Nesyri misses the penalty and misses the chance to increase his team's lead.

With Selim Amallah's goal, Morocco is defeating Comoros; after such a result, they would be sealing their pass to the next round.

One minute of reposition is added.

After the goal, Morocco dominated the game and continued to reach the Comoros goal.

Faïz Selemani and Youssouf M'Changama, a Comoros player, were the first cautions of the match.

After several bounces, Selim Amallah drives the ball, enters the penalty area and powerfully scores to put his country ahead.

So far, Comoros has shown good flashes of soccer and has been mostly in the opposition's half.

It's kick-off! The teams of Morocco and Comoros are already facing each other.

10:51 AM3 hours agoComoros aiming for a surprise

Meanwhile, Amir Abdou, Comoros' coach, spoke about how they are feeling after starting the cup with a loss: "We are facing a difficult opponent. Morocco has a solid group made up of good players and I think they are a team that will go far in this competition. We are trying to correct the mistakes we made in the last game. The team is confident, and we will take this match with a positive attitude."

10:49 AM3 hours agoMorocco to advance to the next round

Ahead of this match, Vahid Halilhodzic, Morocco's coach, mentioned what is the objective in this tournament: "We had an important victory in a difficult match against Ghana. That victory served to improve the mood of the team and the players. We came into this competition with a lot of ambition. It's been a long time since Morocco won the AFCON title. We are here to give our best and we are optimistic to make the Moroccan people happy."

In just under an hour, the Moroccan and Comoros teams will play their second match at the Africa Cup of Nations. For the moment, the players from each country are already at the stadium, and in a few minutes they will begin their warm-up.

10:05 AM3 hours agoTune in here Morocco vs Comoros Live Score

In a few moments we will share with you the starting Morocco vs Comoros live, as well as the latest information from Roumde Adjia Stadium. Stay tuned for up-to-the-minute live coverage of the match on VAVEL.

10:00 AM4 hours agoHow to watch Morocco vs Comoros Live Stream on TV and Online?
9:55 AM4 hours agoComoros: last lineup

Last Monday, in their Africa Cup of Nations debut, Morocco defeated Ghana 1-0 with a goal by Sofiane Boufal, while Comoros lost to Gabon by the minimum difference.

This Friday morning, in the city of Yaoundé, the teams of Morocco and Comoros will face each other in search of points to place themselves at the top of the third sector, which also includes the teams of Gabon and Ghana.

The tournament begins with the Group Phase, of which there are six, and in which there are four teams in each one; the teams in the top two places after the three rounds will advance to the next round, as well as the four best third-placed teams in the Cup. The direct elimination stages will be played in a single match: round of 16, quarterfinals, semifinals and final.

It is the most important competition of the African Football Confederation, and this edition -which is the 33rd in its history- is being held in Cameroon. The tournament was scheduled to take place in 2021, but due to the covid pandemic, it was delayed until this date. The final will be played in the first days of the following month.

9:20 AM4 hours agoWelcome to VAVEL.com’s coverage in the 2021 Africa Cup of Nations Group Stage: Morocco vs Comoros Live Updates!

My name is Alan Rodriguez and I’ll be your host for this game. We will provide you with pre-game analysis, score updates, and news as it happens live here on VAVEL.