Swaths of England to be moved into tougher Covid restriction tiers

Swaths of England will move into tougher tiers of coronavirus restrictions on Boxing Day following the rapid spread of the new, more transmissible, variant of Covid-19, health secretary Matt Hancock has announced.

Mr Hancock told a Downing Street press conference that large areas of southern and eastern England would join London, Kent and some neighbouring districts in the toughest tier 4 — where non-essential shops are closed and household mixing is banned — from one minute after midnight on December 26. They include the whole of Sussex, Oxfordshire, Suffolk, Norfolk and Cambridgeshire.

Areas lifted into tier 3 include Bristol, Gloucestershire, Somerset, Swindon, the New Forest, the Isle of Wight and Northamptonshire

Cornwall and Herefordshire will enter tier 2 from tier 1, leaving only the Isles of Scilly in the loosest restrictions.

Some of these areas were moved up two tiers in a sign of the government’s concern.

Mr Hancock said the number of daily cases had risen 57 per cent in one week and there had been 744 deaths reported on Wednesday. “Against this backdrop . . . it’s absolutely vital that we act,” he said.

Mr Hancock said the case rates in some of the areas entering tier 4 were not as bad as in London. “But the direction is clear and in many cases quite stark,” he said.

“Doubling times are short. We have learned that when it comes to a matter of when, not if, we take action, it is better to act sooner.”

Figures announced on Wednesday showed that 39,237 more people had tested positive for coronavirus, the highest number recorded in a day since the outbreak of the pandemic.

I expect . . . we will see a flattening of the curve in the next two weeks

Ministers introduced tier 4 on Saturday amid alarm that a new variant, labelled B.1.1.7, was spreading more quickly than previous strains, with early studies suggesting it could be 71 per cent more transmissible.

Neil Ferguson, head of disease modelling at Imperial College London, told the House of Commons science and technology select committee on Wednesday that the new fast-spreading variant of coronavirus had reached “everywhere” in the UK — and probably the “vast majority of European countries” — but that restrictions over Christmas would slow its spread.

“Schools are now shut, we are in a near-lockdown situation across the country, contact rates are lower over Christmas,” he said. “I expect, though I hesitate to make any sort of predictions, we will see a flattening of the curve in the next two weeks. We will see at least a slowing of growth.”

Prof Ferguson said the “critical question” was what would happen in January when schools reopened, “and the extent we want to make public health measures more uniform across the country if the new variant is everywhere”. 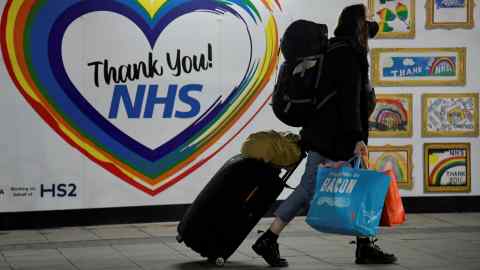 There were some hints from the epidemiology that children might be somewhat more susceptible to infection by the new B.1.1.7 variant than older forms of Covid-19, but the evidence was not strong, he said.

Susan Hopkins, deputy director of the national infections service at Public Health England, told the Downing Street press conference: “We have no evidence this virus is more transmissible in children yet.”

Mr Hancock also said at the press conference that the government had detected a second new strain of Covid-19, linked to South Africa, in two cases.

Mr Hancock said all people arriving from South Africa in the past two weeks had had to self-isolate immediately. “These measures are temporary while we investigate further this new strain which is shortly to be analysed at Porton Down,” he said, referring to the government’s defence science and technology centre.

The expansion of coronavirus restrictions in England is likely to exacerbate tensions between prime minister Boris Johnson and some members of his parliamentary party. Several backbench Conservative MPs criticised the government’s decision at the weekend to rip up the plans to allow Christmas bubbles and create a tier 4 without having a vote in parliament.

The concentration of cases is centred around London: all but three of London’s 33 boroughs now have more than 400 positive cases per 100,000 people over the most recent week of data.