The Sun
Share on FacebookShare Share on TwitterTweet
KANYE West threatened to “kick Pete Davidson’s a**” in a new diss track about Kim Kardashian’s boyfriend. A snippet of the song, which the rapper made with The Game, was recently leaked and f…

A snippet of the song, which the rapper made with The Game, was recently leaked and features Ye talking smack about his ex’s new man.

The new track, called Eazy, leaked on social media on Friday morning, and Kim’s ex went straight for her new beau, Pete, in the lyrics.

Kanye rapped at one point: "God saved me from the crash, just so I can beat Pete Davidson's a**.”

The official version of the song is reportedly set to be released at midnight.

Both Kanye and The Game shared the same image of what fans in the comments believed to be a "skinned monkey" with a red background.

The artists wrote in their respective captions: "MY LIFE WAS NEVER EAZY"

The Game added a hashtag to his, which read: "#Drillmatic"

Most read in Celebrity 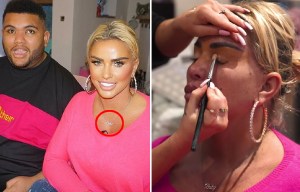 While Kim has moved on with Pete, Kanye has started up a romance with actress Julia Fox.

The new couple - who met on New Year's Eve - enjoyed a star-studded night at Delilah's earlier this week, rubbing shoulders with Madonna and Floyd Mayweather, as well as Antonio Brown and his latest collaborator, The Game.

The Game shared a snap of himself in a Los Angeles recording studio with Kanye, Moneybagg Yo and Antonio on Tuesday.

Teasing his new project, he also captioned this shot with: "D R I L L M A T I C"

Ye's diss track aimed at Kim's boyfriend Pete comes after the two were just spotted packing on the PDA during a pizza and ice cream date night this week.

As The Sun reported exclusively, the two were caught getting comfortable with each other during a secret date at an L.A. restaurant.

The couple were spotted holding hands and hugging each other tightly inside Jon & Vinny's Italian restaurant, while waiting for their meal.

A fellow diner told The Sun: “They were there around 8pm (Tuesday) night. Just the two of them. Corner booth.

"Him facing out to the restaurant and her facing just him. They were kissing at their table."

He added: "They were definitely intimate and leaning into each other during the date.”

After dinner, the power couple stopped by a local Rite-Aid Pharmacy for some Thrifty brand ice cream.

Kim has been linked to Saturday Night Live star Pete since October 2021, after filing for divorce from Kanye earlier in the year.

Kim and Pete have been spotted on a slew of dates over the last few months.

Shortly after she hosted SNL, they were spotted having a Halloween outing at amusement park Knott's Scary Farm in California.

Kim and Pete have visited his hometown of Staten Island a few times, as well, for both movie and dinner dates.

While these two have been enjoying some casual dates, Kanye has been treating his new girlfriend to a lavish lifestyle.

The pair went to celeb hot spot Craig's on Monday with former Tampa Bay Buccaneer Antonio, who posted about their evening online and could be set to collaborate with the star.

The trio were celebrating the release of Ye's new Yeezy Gap commercial that featured his song, Heaven and Hell, from his album Donda.

After dinner, the new couple were seen entering the luxury five-star London West Hollywood hotel, where rooms start at around $400 a night and suites can set you back $880.

Previously, Kanye and Julia were in New York City, where he took her to see Slave Play before enjoying dinner at Carbone - and even took along his own photographer for a sizzling shoot.

Pete Davidson RAPS during show with singer Jack Harlow after Bahamas getaway with Kim Kardashian
We pay for your stories!

Do you have a story for The US Sun team?