The Indian Express
HomeSportsCommonwealth GamesFrom Sourav Ghosal's heartwarming hug to Jordan Sakkas' funny 'spin': Watch eye catching visuals from Day 6 of CWG 2022 After winning the medal, Sourav Ghosal immediately jumped off the court and climbed up to the spectators' row to hug his wife 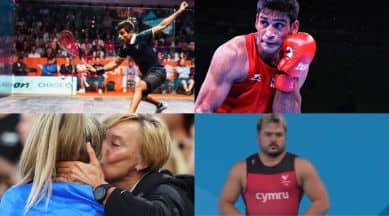 Four eye catching visuals from Day 6 of the CWG on Wednesday. (videograbs)

You have exhausted your
monthly limit of free stories.

You need a subscription to read on.
Now available at Rs 2/day.

This premium article is free for now.

Register to continue reading this story.

On Wednesday, Saurav Ghosal grabbed India’s first-ever singles medal in squash as he won the bronze medal at the Commonwealth Games. After winning the medal, he immediately jumped off the court and climbed up to the spectators’ row to hug his wife. World No.15 Ghosal played brilliantly against England’s James Willstrop from beginning to end, winning 11-6 11-1 11-4 in the bronze play-off.

“I’m very very happy, it’s a historic day for Indian squash. To be able to do this against a player of this calibre is very special. I’m happy that after all these years I have been able to win this,” Ghosal said.

Ashish vs Aaron: ‘One of the best amateur bouts ever’

Ashish Kumar and Aaron Bowen in action during their light heavyweight quarterfinals, in what the commentators described as ‘one of the best amateur bouts ever’.

Ashish lost by a split verdict but he received a standing ovation from the crowd.

Eilish McColgan won the gold medal in women’s 10,000m for Scotland. After winning the race, she rushed to her mother Liz and hugged her. Her mother, Liz also had won gold in 1986 and 1990.

The 31-year-old said, “My family were here, the crowd on that last 100m, well it was vibrating through my own body,” said McColgan after she took victory in 30min 48.60sec. “Without the crowd, I wouldn’t have finished that. I wanted it so badly.”

“I know the girls were super strong. But I knew if I could stay with them I had a chance of a medal. This is an absolute dream”, she added.

Jordan Sakkas had a disappointing run in the ongoing Commonwealth Games as a total of 328kg left him 27kg shy of the podium in the men’s 109kg final. In his third attempt, he tried to lift 190kg but got failed and he did a funny spin on the arena. However, he accepted his fault and said, “It was a difficult comp for me, it just wasn’t my day”.

“It’s one of those things that you have this expectation of yourself and sometimes you realise soon in your warm-up that your body is not responding quite the way you expect it to. Although I’m disappointed in my performance, I’m proud of what I was able to achieve on the day given my physical capacity”, he added.

The Indian Express website has been rated GREEN for its credibility and trustworthiness by Newsguard, a global service that rates news sources for their journalistic standards.