MarketWatch
Share on FacebookShare Share on TwitterTweet
U.S. stock benchmarks trade just above the neutral line as investors gird for a House vote on impeaching President Donald Trump a week before he is set to... 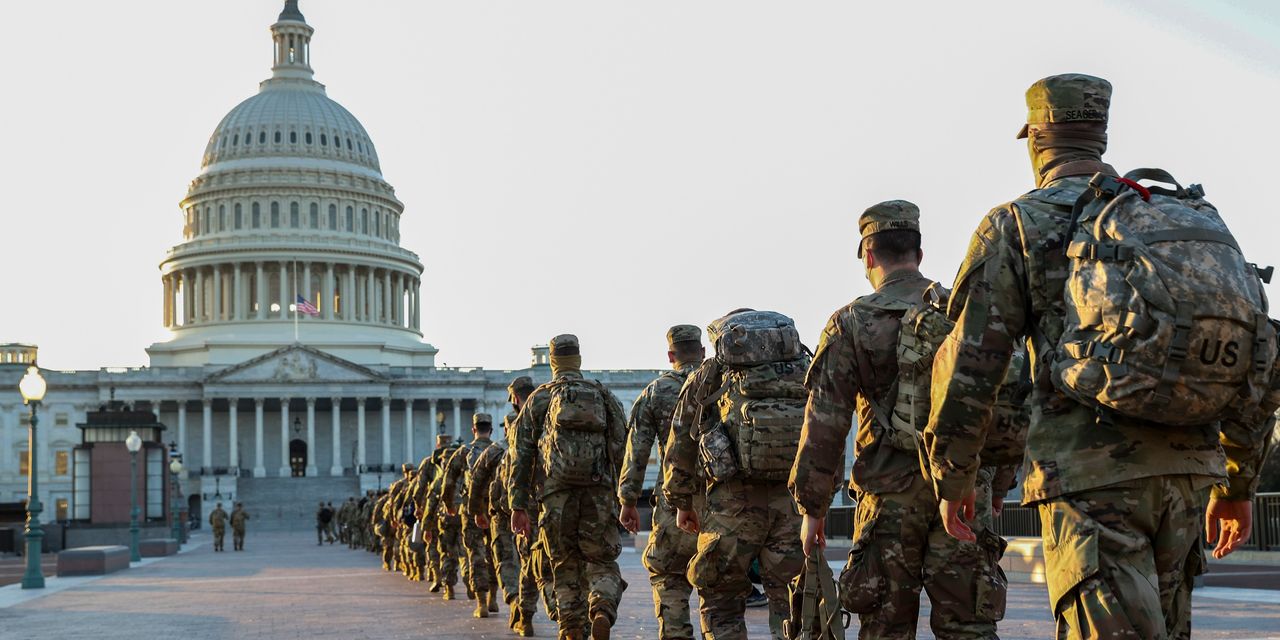 U.S. stock benchmarks traded marginally higher Wednesday morning after data showed inflation remained muted and ahead of a House vote on impeaching President Donald Trump one week before he is set to leave office.

What are major indexes doing?

Stocks struggled for direction Tuesday, flipping between modest gains and losses before finishing to the upside, allowing the Dow, S&P 500 and Nasdaq Composite to avoid their first back-to-back losses of 2021.

U.S. inflation remained tame in December, allowing the benchmark 10 year U.S. Treasury note yield BX:TMUBMUSD10Y to slip after a rise over 1.0% in the past two weeks to its highest level since March last year.

The consumer price index rose 0.4%, while the core index minus volatile food and energy prices was up 0.1%, matching the MarketWatch consensus. The annual headline number ticked up to 1.4%, but the core reading remained at 1.6%.

The headline CPI number has now risen for seven months straight and investors will keep a wary eye on inflation, said Boris Schlossberg, managing director at BK Asset Management, in a note. That’s because the stock-market rally has been built on ultralow interest rates, which allow for much higher equity valuations, he said.

And while rates remain historically low, “markets are always a relative rather than absolute game and even a 50 basis point rise off a 1% level represents a 50% increase in rates which could then cause massive speculative flows out of stocks — especially those with high multiples,” Schlossberg said, referring to the price-to-earnings ratio.

Meanwhile equities remain supported by expectations President-elect Joe Biden and a Democratic-controlled Congress will push through another large round of aid spending to sustain the economic recovery from the coronavirus pandemic.

The U.S. has the highest reported case tally in the world at 22.8 million and the highest death toll at 380,821, or more than a fifth of the global total. The U.S. added at least 229,603 new cases on Tuesday according to a New York Times tracker, and counted at least 4,402 deaths, the most in a single day since the start of the outbreak.

In U.S. political news, Donald Trump could become the first president in U.S. history to be impeached twice, as the House of Representatives prepares Wednesday to approve a charge of inciting an insurrection following the riotous invasion of the Capitol last week.

Peter Andersen, founder of Andersen Capital, thinks political considerations are weighing on the market much more than many investors may realize.

“The market right now just has no direction,” Andersen told MarketWatch. “People are focused so much on the short-term. I’m holding tight between now and the inauguration, making no investment decisions, because it’s near-chaos in the market. Nobody has any idea on how things are going to resolve, so we get fluctuations that don’t make any sense.”

Markets haven’t exhibited a lot of volatility, Andersen noted, but added, “The orderly nature of things can throw people off and I think if you look under the surface, and you polled all market participants now, they would say ‘damned if I know.’ This is far worse, far more difficult, than 2008.”

Also coming up on Wednesday, the Federal Reserve’s Beige Book report, an survey of businesses by region, is due at 2 p.m. Several Fed officials are also set to make remarks Wednesday, including Gov. Lael Brainard at 1 p.m. and Vice Chair Richard Clarida at 3 p.m.

Which companies are in focus?

What are other assets doing?

Read next: Reflation nation? This time, post-crisis tailwinds favor banks, and the economy