Brazilian Hulk bodybuilder: who was Valdir Segato dead at 55, how ...

NationalWorld
Get all of the latest People news from NationalWorld. Providing fresh perspective online for news across the UK. 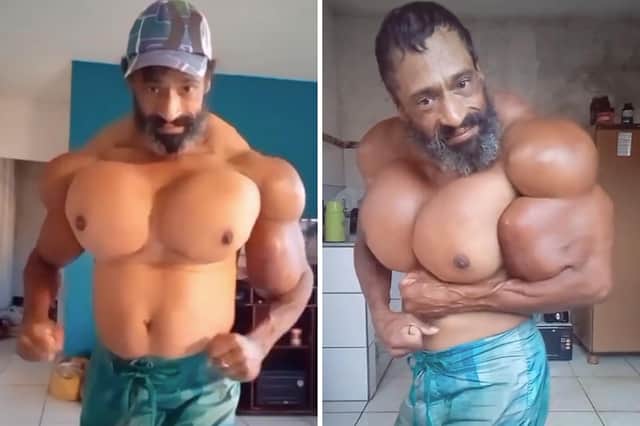 A Brazilian bodybuilder who has been compared to the Hulk has died on his 55th birthday.

Valdir Segato was a celebrity in his native São Paulo and on social media, where people often compared him to Arnold Schwarzenegger or He-Man.

But how exactly did he die - and why did he inject himself with a chemical containing oil?

Who was Valdir Segato?

Valdir Segato, 55, was a bodybuilder from Brazil.

Originally from São Paulo, he was based in Ribeirao Preto - a city in the wider São Paulo state.

The bodybuilder’s teenage years were reportedly plagued by drug addiction, which left him so skinny he was nicknamed ‘skinny dog’.

As well as being a local celebrity due to his 23-inch biceps Segato was also a major TikTok star, becoming known as the ‘Brazilian Hulk’.

The bodybuilder said he modelled himself on the physiques of Arnold Schwarzenegger and He-Man.

Despite his massive international following, it has been reported Segato led a reclusive life and had few close friends or relatives.

How did Brazilian Hulk die?

Valdir Segato was celebrating his 55th birthday on 26 July 2022 when he passed away.

“He came crawling through the back house and came to the front,” Globo quoted Segato’s neighbour - Moisés da Conceição da Silva - as saying.

“Then he knocked on my mother’s window - knocked, knocked - then she woke up and he said ‘help me, help me because I’m dying’.

"They put him in the car and then went to the UPA [North Emergency Care Unit - a local hospital].

“He arrived at the UPA and he fell at the reception - I think he had a heart attack."

The influencer had had previous spells of ill-health, according to the accounts reported by Globo.

His neighbour said that several months before his death, Segato had suffered similar symptoms to those he had in the run up to his death, including shortness of breath and wheezing.

Why did Brazilian Hulk die?

While an official cause of death has not been given, Valdir Segato is believed to have died as a result of complications arising from his use of a steroid alternative.

The bodybuilder injected himself with a substance called synthol, which is a blend of oils, sterilising alcohol and the painkiller lidocaine.

While the substance does not enhance muscle strength, it acts as a cosmetic implant that gives the appearance of big muscles.

However, it also has side effects, including deformed muscles, nerve damage, heart problems, stroke and compromised immunity.

According to the Daily Mail, Segato first began using the substance after being offered it in a gym when he was recovering from his drug addiction.

Despite being warned that his synthol use could force doctors to amputate his limbs, Segato continued to inject himself with it and had a target to have biceps that were 68cm in diameter.