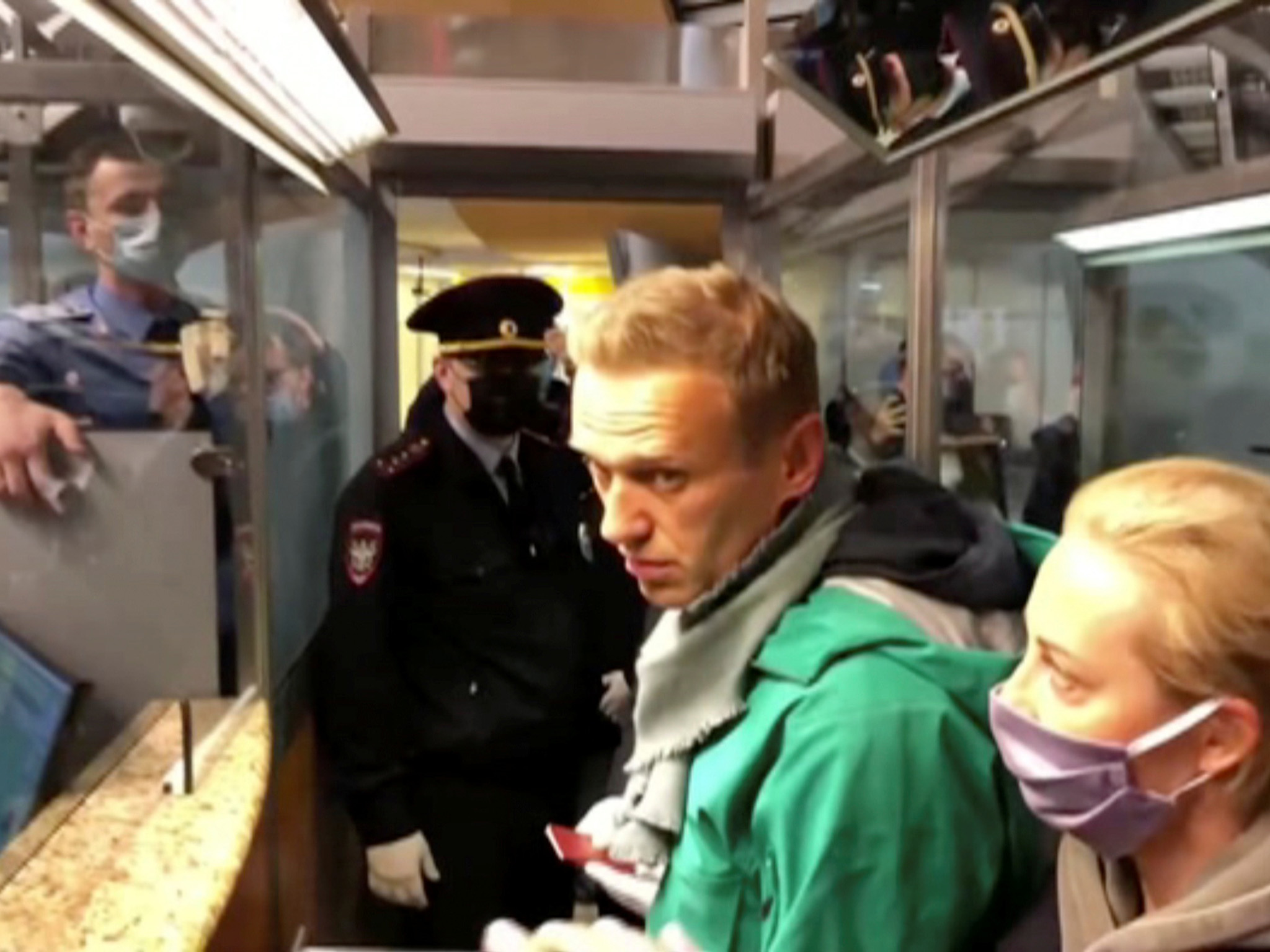 The opposition leader’s detention by Russian authorities has drawn international condemnation – with some western nations calling for sanctions against Vladimir Putin’s government.

“It is appalling that Alexei Navalny, the victim of a despicable crime, has been detained by Russian authorities. He must be immediately released,” said foreign secretary Dominic Raab, who stopped short of threatening any further action against Russia.

Mr Raab added: “Rather than persecuting Mr Navalny, Russia should explain how a chemical weapon came to be used on Russian soil.”

Russian police detained Mr Navalny on arrival in Moscow on Sunday after he flew home to Russia from Germany for the first time since he was poisoned last summer using using Soviet-era nerve agent Novichok. Germany said it has ‘unequivocal evidence’ the Kremlin was behind the attack.

Prior to his arrival at Moscow’s Sheremetyevo airport, Russia’s prisons service said the 44-year-old had violated parole terms from a suspended sentence on a shaky 2014 embezzlement conviction.

Following the news of his arrest, a host of British MPs used Twitter to call for his release. Labour’s shadow foreign secretary Lisa Nandy led the calls for action, tweeting: “Alexei Navalny was the victim of a cowardly chemical weapons attack. He has shown great courage in returning to his homeland.”

She added: “His detention is unjustifiable and an insult to the Russian people. He must be released immediately and his attackers brought to justice.”

Labour MP Catherine West called for a coordinated response “at speed” from the UK government, the EU and the incoming Joe Biden administration in the US. “It can’t be right that an opposition leader, whose life was almost taken in an aggressive poison attempt, is arrested on arrival,” she said.

While the foreign ministers of the UK, Germany, France and Italy called for Mr Navalny’s release, Lithuania said it would ask the EU to swiftly impose new sanctions on Russia. Czech foreign minister Tomas Petricek also said he wanted the bloc to discuss possible sanctions.

Jake Sullivan, one of Mr Biden’s top aides, told Moscow to free Mr Navalny, and US Secretary of State Mike Pompeo said on Twitter he was deeply troubled by Moscow’s decision to arrest Navalny.

Russian foreign minister Sergei Lavrov dismissed Western concern over Mr Navalny’s case, casting it as an attempt to distract from the West’s own problems. “You can feel the joy with which these comments are coming out,” said Mr Lavrov.

“Judging by everything, it allows Western politicians to think that by doing this they can divert attention away from the deep crisis that the liberal model of development finds itself in,” he said.